I have had only one whoopie pie in my life, and it was when the stooges ended up at a vegan bakery. I just thought it was a giant Oreo cakester. Who knew the Whoopie pie had such a long and detailed history? 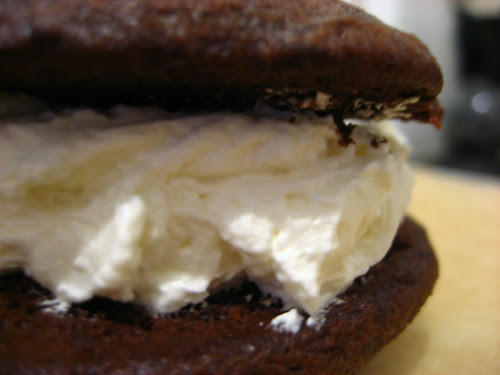 April 19, 2010
Name of cakes; Whoop There It Is
Occasion: HCB
Constituents: a marshmallow/buttercream frosting sandwiched between two little chocolate cakes

The little cakes are pretty easy to make, in fact the most complicated part would probably be melting the chocolate. The cakes contain both melted chocolate and cocoa powder, giving the cakes a deep chocolate flavor without being too sweet. Speaking of sweet, my very favorite dark muscovado is used and it perfumes the cakes with molasses. Yum!

The little cakes are scooped out onto baking sheets; six per sheet. I don't have an ice cream scoop, but Rose mentions that the scoop in question is 2 tablespoons, so I just used my tablespoon. However I had enough batter left over to actually add another tablespoon and a half to each cake. Go figure.

The little cakes bake up in ten minutes and thankfully, held their shape very well. They are cooled on a rack and set aside while the filling is made. 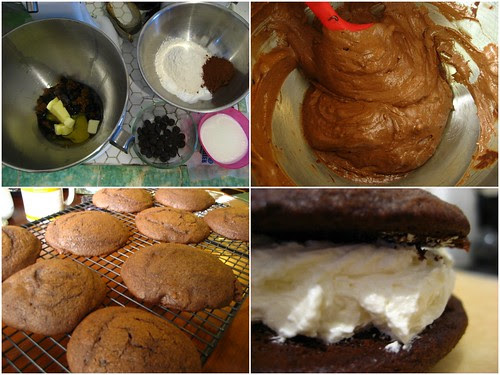 I guess traditional whoopie pie filling is marshmallow cream, but Rose fancies hers up a bit. The vegan whoop I ate had the classic shortening/powdered sugar filling which further convinced me what I had was a giant oreo cakester.

The cream is made by first making the marshmallow; a stiffly beaten egg white is set aside while a sugar syrup boils. The two are mixed together, creating usually quite a mess, and to finish this marshmallow cream a little bit of butter and vanilla are added. This gets cooled for a few minutes in the refrigerator, while butter and powdered sugar are beaten wildly in the mixer. The marshmallow is added in and ta-da! Marshmallow cream! 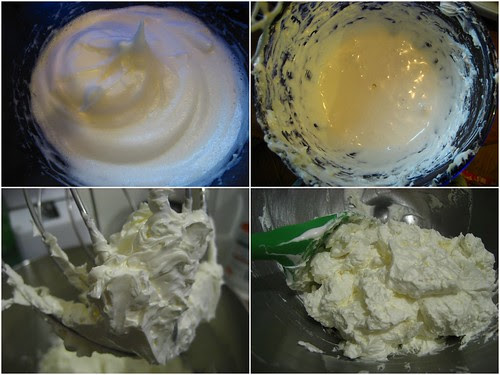 I would guess that about half of the sugar syrup ended up on the sides of the bowl or stuck to the spatula, so my cream wasn't very sweet. Which was okay, but it also dulled the flavor of the cream in general. But I'm not really complaining.

After hanging out in an airtight container my cakes were very sticky. The biggest cake actually split in two as I was trying to pick it up off the plate. I chose to eat my whoopie pie with a fork since it was so sticky.

Cookie and Cabbage seemed to like them well enough. Cookie especially. She seemed to be very pleased with them. We divided up the six pies so that each of us got two, and I suspect cookie might eat both of hers tonight! I am trying to save my second one for, you guessed it, breakfast. 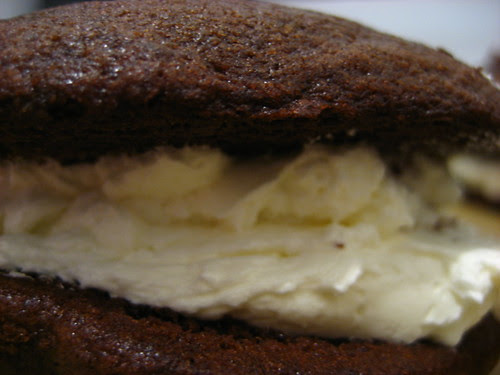 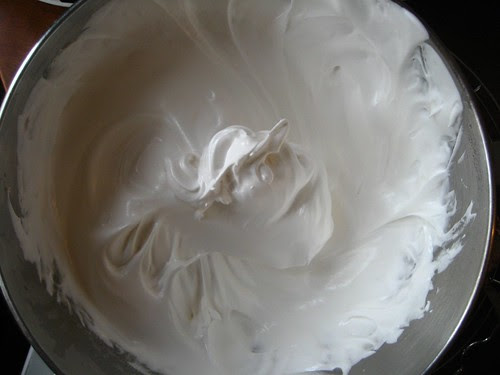 What to Do With Leftover 7 Minute Frosting