And here we are, our last new recipe together as Alpha Bakers. Baking through Rose's Baking Bible these last two years has been quite a journey. Parts fun, parts exasperating, time-consuming and lost-in-creating, delicious and exquisite and confidence building, this has been a wonderful experience. I am so glad I got to participate and share along with all of the Alpha Bakers, and all of you who have read along.

Two years ago I struggled with pie dough, thought store bought cookies were good enough to never bother baking my own, and never really had baked a loaf of bread. And now, cookies are one of my favorite things to bake (and store bought cookies are just so lacking), pie dough more often than not comes out flaky and wonderful, and the door to the wonderful world of bread has cracked open. And of course, there are always the cakes. 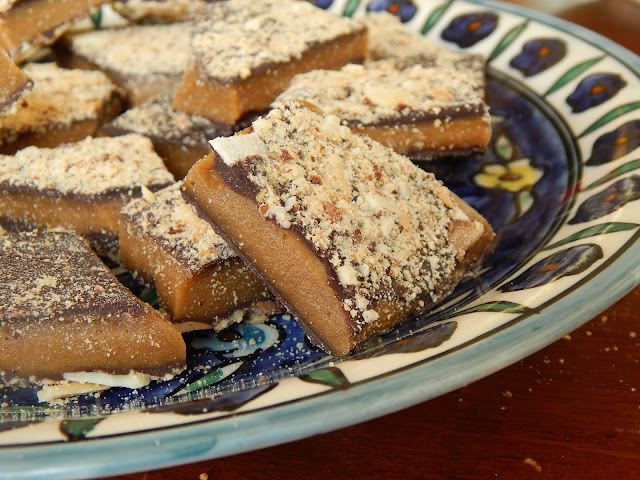 So anyways, our final project is a wonderful and easy toffee, coated on both sides with chocolate and toasted almonds. Crunchy and sweet and perfect for the holiday platter.

Uncharacteristically, Rose gives a rather large range for the chocolate: anywhere from 170 to 340 grams. I discovered during the test bake that I preferred the lowest amount of chocolate so that the toffee could really take center stage. So I used 160 grams total--80 grams per side. I poured the toffee into an oval that was a bit smaller than called for, so my toffee is thick and there's plenty of chocolate. The chocolate I had on hand was a bit too semi-sweet; had I a higher percentage chocolate I might have considered using more. But then again, maybe not. I like the toffee to be in charge. 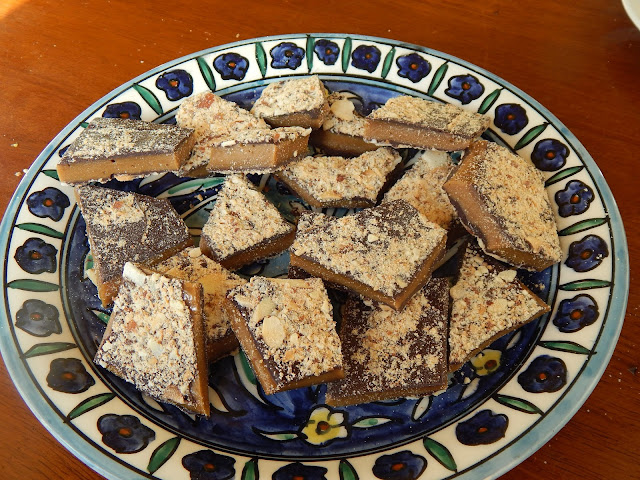 The Alpha Bakers are doing one more week together, just for funsies. We are making the amazing Kouigns Amann again, the first recipe we did together way back when. It is the most amazing laminated pastry ever, and one of the most amazing things ever to come out of my kitchen. It takes all freaking day to make, but it is so, so worth it. See you next week, friends.

This is our second-to-last recipe! I can't believe it! (I still have about 10 or so recipes left to bake, but the official bake-through is coming to an end.)

Marie has decided we should be ending our two year long baking adventure on a couple of easy recipes, and I'm all for it. These cupcakes are a re-tread of Rose's popular White Chocolate Whisper Cake from the Cake Bible, scaled to make 16 cupcakes. The mousseline is another popular buttercream from the same book. Rose discovered a new way to pipe frosting on a cupcake that looks rather like a rose, so she decided to create this recipe to show us. 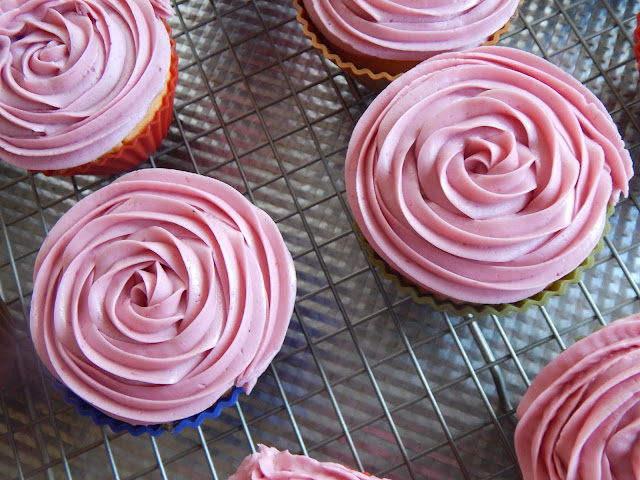 The batter for the cupcakes comes together lickety-split, including melted white chocolate which gives them a very tender crumb. Rose gives the weight for each cupcake so filling each cup is extra easy (if you own a scale). I decided to use my silicone cupcake cups as I only have one cupcake tin and I didn't want part of the batter waiting in the refrigerator. The cups were placed on a wire cooling rack on top of a baking sheet to bake, so that there would be airflow underneath the cups as well.

The mousseline took the better part of the morning. First up was making the raspberry puree, which requires concentrating raspberry juice (easy but messy in the microwave) and sieving the pulp to remove the seeds (takes forever; hate doing it). The pulp is mixed back into the concentrated juice and half the volume of sugar is added. 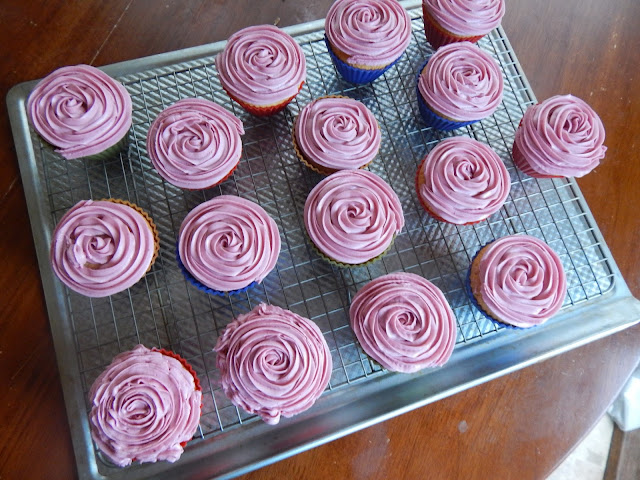 So anyways, butter is whipped in the mixer for a bit then set aside. In another mixing bowl, egg whites are whipped to stiff peaks with some sugar to stabilize (I skipped adding the cream of tartar, which also stabilizes the meringue). Meanwhile, a sugar syrup is boiled on the stove. Then the syrup is drizzled into the meringue while the beaters threaten to spin the sugar all over the sides of the bowl. Then the Italian meringue needs to cool down to about 70F. Then you whip up the butter again, add the meringue, and mix like crazy while the whole mess curdles, falls apart, then eventually turns into something decidedly creamy. It is nothing short of a miracle when that happens. Then a bunch of the raspberry puree is added in, which instead of turning my buttercream a pretty pink color turned it a bit of a mauve. Which is ok and still looks pretty, and works for a rose. 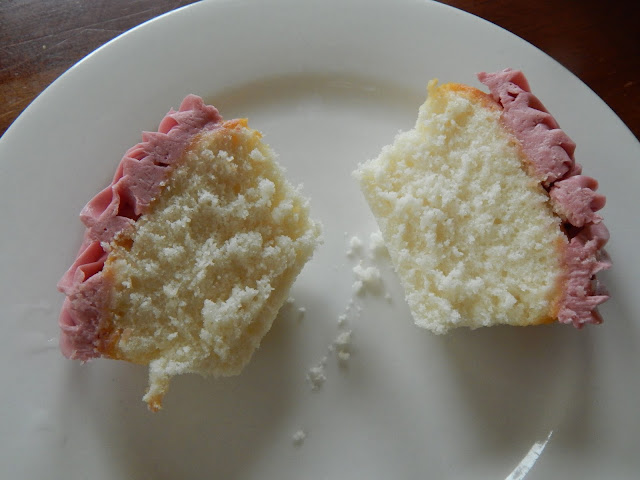 Then the dreaded piping happens. I actually am really surprised how well things turned out over here as I am not the best piper of frosting.

They are a wonderful cupcake; so light and soft. They look pretty and delicate and taste as such. I immediately wanted another cupcake, but in an attempt to model good behavior for Eliot I did not. He is in bed now, and of course I am eating another cupcake! 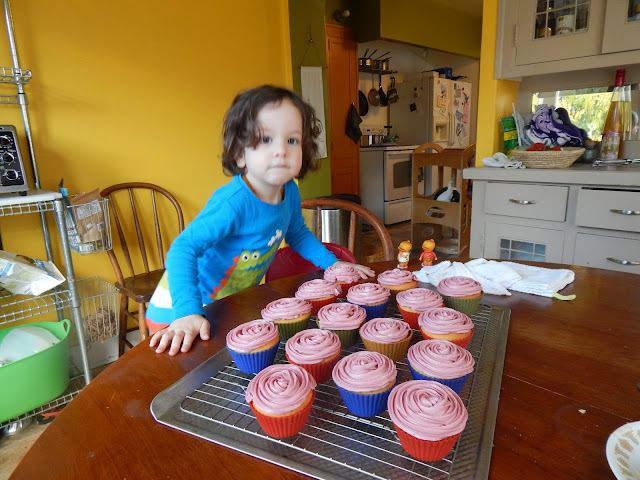 I have never tried a madeleine so I have no idea if this is true to the original or not. It is a lovely soft little chocolate cake. Rose says the big problem of the madeleine is that they get stale so quickly so she based the recipe on her Chocolate Domingo Cake and glazed them in a thin ganache.

I don't know, people. Is this a true madeleine? All I see are the packaged madeleines at the Starbucks. However, I know already that these are 5,000 times better than anything that could come in a plastic package.

They are easy to make, and pretty quick. I bought a normal sized madeleine pan (the recipe was for either mini mads or regular) and since it was non-stick I just used a non-stick spray instead of spray and flour. I spooned the thick, creamy batter into the molds (thankfully Rose tells you how much batter to put in the molds) and smoothed it out with an offset spatula. The recipe says it will make 25 normal sized mads but the pan makes 12 at a time, so I decided to just eat the last 16 grams of raw batter instead of baking just one little cake. I called it baker's treat. The batter is like soft serve ice cream.

These are dangerously easy to eat, and so enjoyable. I kind of have to forget they are in the kitchen. That is a good problem to have. 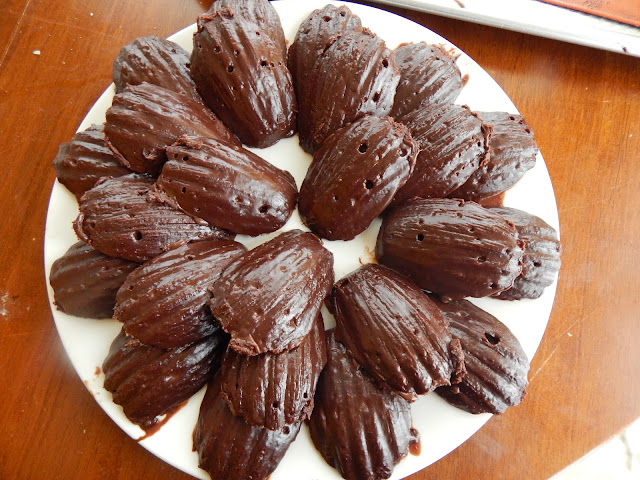